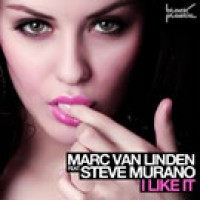 Marc van Linden feat. Steve Murano
I Like It

Two of the hottest DJ’s and producers from Germany collaborate to bring you another club anthem ready to fuel the fire of the world’s discerning DJ’s. Berlin based DJ & producer Marc van Linden and Leipzig´s House-Hero Steve Murano have joined forces to bring you ‘I LIKE IT’, a track that does exactly what it says; an energetic slice of tech goodness featuring the lead vocals of Yvonne John Lewis.
//The History//
2004, the year that ‘I LIKE IT’ from Narcotic Thrust (house music duo from the United Kingdom consisting of producers Stuart Crichton and Andy Morris) ruled the dance floors around the world (‘I LIKE IT’ broke into the Billboard Hot 100 at #83 and reached #9 in the UK Singles Chart) and ever since then has stayed in the record boxes of most DJs under the category "Bombs"!!! Marc van Linden is one of these DJs who plays and loves this classic dance bomb! In 2009 he decided to do his own version and to collaborate with his friend Steve Murano.
//The Voice//
Yvonne John Lewis s a female lead and backing singer from England. Known for her immense musical and vocal range, her sound reminds listeners of Elizabeth Fraser of the Cocteau Twins. London based, she was discovered by Osmond Wright, better known by his stage name Mozez and a singer for British downtempo group Zero 7. John Lewis resultantly first featured as a lead vocalist on Zero 7s albums, and has gone on to provide lead vocals for and been featured on recordings by artists including as Basement Jaxx, Sia, Stella Browne, Narcotic Thrust and Rollercone. She is well known as the featured singer on Narcotic Thrust's number one Billboard Hot Dance Music/Club Play hit from 2002, „Safe From Harm“. John Lewis has worked as a backing vocalist for artists like Bryan Ferry, Blue, Enrique Iglesias, James Fargas, Westlife and Atomic Kitten.